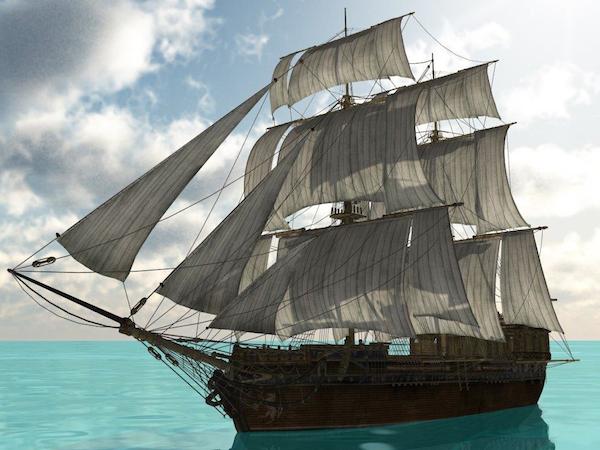 Jon and Captain BlackHeart walked toward the end of a long pier where a tall, imposing black ship was docked. Jon eyed the ship with admiration. The two tall masts had a crow’s nest atop each of them. Rolled white canvas sails, which were tied up at the yards on both masts, and the white sail tied at the bow stood in stark contrast to the rest of the ship, which was tar black. Gold swirls that looked like waves decorated the top of the ship’s wooden side rails and polished brass could be seen shining here and there. The only other color on the ship was the sea green mermaid, with long golden hair to the waist, which was fitted on the underside of the bow. In her outstretched hands, the mermaid held a giant black shiny stone similar to the black opal in the captain’s ring.

A British flag flew at the ship’s stern. Flying off the foremast of the ship was a white flag with a big black heart in the center. The name on the side of the bow in large gold lettering read, Black Opal.

“This is your ship?” Jon asked excitedly, because this was the most beautiful sailing ship he had ever seen. Even pictures in the books he had read could not equal it.

“Yes, my ship. She’s a beauty, eh, lad? A brigantine, she’s called, with ten cannon in her ports,” replied BlackHeart, smiling, as Jon stood gawking at the tall black ship, which rocked gently in the breeze.

“We just outfitted her with four more small cannon on the top decks—‘small guns’ we calls them.” BlackHeart was pleased that the boy admired his ship, just as he did. That would make it easier for the captain to coax him aboard. “She’s a new ship, lad—British-made. First ship built of her kind. There’s not another like her on the high seas!” BlackHeart said proudly.

—Excerpt from BLACKHEART’S LEGACY, Book 1, The Odyssey of Jon Sinclair

The Brigantine was a powerful type of tall ship that was highly sought after by pirates. In addition to being a status symbol for big-boy pirates who didn’t have to run from their enemies, it was a ship made for combat and made for the brave and powerful pirate who would command it.

The Brigantine was often used by the British Navy to chase down pirates in sloops. The ship carried from 10-12 guns (cannon) in her ports and often smaller guns on the main deck. She boasted up to 100 crewmen and more cargo space than a sloop. Brigantines had a foremast, which carried square-rigged sails, while their mainmasts used a fore-and-aft, and a square-rigged topsail. This combination allowed the Brigantine to take advantage of different wind conditions. The ships measured up to 80 feet long and weighed up to 150 tons.

Such a ship was the Black Opal in BLACKHEART’S LEGACY … and such a pirate was Captain BlackHeart.

» 6 Awesome YA Pirate Books You Need to Read
« Yo-Ho-Ho and a Bottle of Rum: How to Talk Like a Pirate