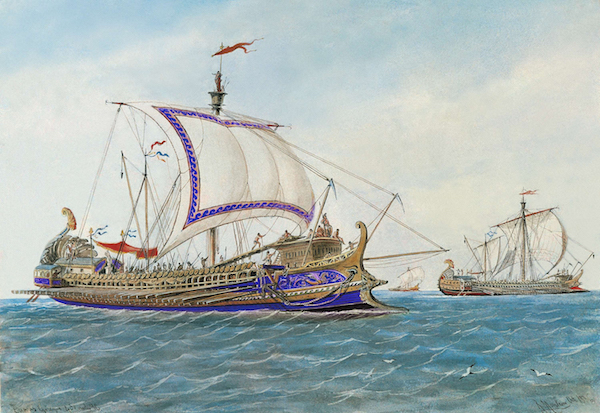 Triremes – Warships of the Ancients x

An excerpt from the young adult fantasy book KEYS TO ATLANTIS, Book 2 of The Odyssey of Jon Sinclair trilogy:

Struggling to shake the dazed feeling from his head, Jon wondered where on earth he could be. The sky was a strange pink color. He looked around and saw ropes curled in a circular manner, like those on a ship’s deck. But this was no ordinary ship.

He stared up into the eyes of a long-necked, golden sea serpent riding high at the prow of the ancient ship, its metallic gold sparkling in the sunlight. He glanced back at the giant white sail that was edged in blue and gold. He crawled to the side rail of the ship and peered over. The name Artemis was painted on the outside prow. He looked down. Long oars lifted and plunged below: three levels of oars, each on a different course of time, but all synchronized as the ship moved swiftly in the water.

A trireme! I’m on a trireme, he thought.

A trireme was a triple-decker warship, used mostly as an attack vessel. Three banks of oars, each bank located on a separate deck level, required 170 experienced oarsmen for its propulsion. What constituted their experience was a combination of physical stamina, a consistency of hitting the water with a full stroke, and previous battle experience—sea and land. The Artemis crew was commanded by a horator, or taskmaster, whose job was to manage the oarsmen using whatever force necessary to get the ship to its destination. There were two horators on the trireme. The master horator conducted the ship forward by beating a drum rhythm, which set the pace for the ship’s oarsmen, keeping the three levels of oars dipping and lifting in perfect synchronization.

Biremes, smaller double-decker ships, made up a large part of the fleet of warships. They were usually defensive ships that took their direction from the larger trireme they were defending.

The command trireme, Artemis, used in Keys to Atlantis was 100 feet long, had three decks of oarsmen and a top deck for soldiers and warriors. A large opening in the top deck, shaped like a keyhole, passed down the center, from bow to stern dividing the ship’s fighting platform into two sections: port and a starboard. This top deck afforded positions for attack archers, spearmen and soldiers on either side. The first level of oarsmen sat directly beneath each side of the top deck taking up one oar each. The rowers worked in precision with each other, as well as with the other two decks of oarsmen on their side of the ship. All oarsmen—port and starboard—were synchronized by level and in accordance with those men above or below them. Just one misplaced oar could cause a wipeout of a section of oars or even a whole side of oars. Needless to say, these men had to be well experienced at the oars.

Typically, these ships traveled close to the shoreline in the shifty winds and weather of the Mediterranean Sea. Obtaining provisions and fresh water frequently for the crew of a large trireme, or a whole fleet of ships, was a necessity. It was not unusual for a cargo trireme to travel with a fleet carrying provisions and fresh water, for it took two gallons of water per oarsman daily to keep him hydrated. A trireme carried at least two work shifts of oarsmen so the men would not get too exhausted and arrive at their destination unfit to fight on sea or land.

The trireme, a large lumbering ship, depended on its size and weight to accomplish its tasks. With soldiers’ shields protecting its sides, it plowed through the waters. Its grand battering ram mounted at the waterline was to be avoided at all costs by smaller ships and those of opposing forces as well.

By comparison, the bireme was smaller in size and weight. With a number of them in the fleet of a grand trireme, they made up a force to be reckoned with. The bireme was equipped with only two decks of oars, carried fewer men and was lightly outfitted with a fast rudder, thus propelling it faster through the water. Speed was essential to the bireme in avoiding the big rams of triremes, as well as in effecting quick hit and run tactics.

Could a grand trireme like the Artemis with its complement of 17 biremes stand-off 270 enemy warships before the gates to Atlantis—if it were commanded by a smart, innovative captain like BlackHeart, accompanied with sharpshooting archers like Jon Sinclair at his side?

Find out in KEYS TO ATLANTIS, Book 2—The Odyssey of Jon Sinclair.

Want to follow along with Jon Sinclair and Captain BlackHeart on more high-seas adventures? Sign up for a 30-day Free Trial of Audible and get BlackHeart’s Legacy, the first book in The Odyssey of Jon Sinclair series, as a FREE audiobook download! Click here to get started.