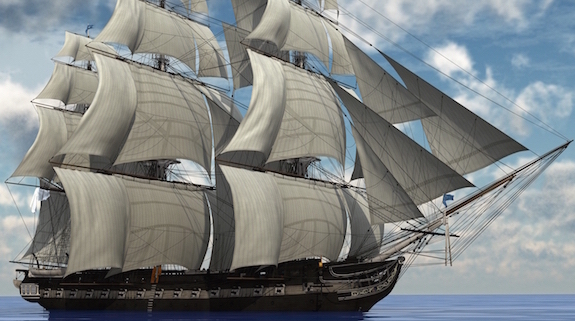 In the late 17th and early 18th century Caribbean Sea, the Frigate was the “Man-O-War” of its time, weighing in at 360 tons and 110 feet. It took a crew of 195 men to man the 3 masts of sails; 26 big guns (cannon) on one level, and various other smaller guns scattered about the raised quarterdeck and forecastle. As part of the British Navy’s fleet, some frigates carried up to 48 guns and more men. Because of her size and equipment, she was a warship next in size to the “ship of the line.” The frigate usually headed most major British shipments in the Caribbean. The mere sight of this vessel usually sent pirates fleeing for cover in the nearest coastal coves and rocks — places where the frigate could not go because of her size and the depth of her hull.

For the job in the Caribbean, which consisted of reconnaissance and protecting British interests in shipping, trading, and the gathering up of all the riches possible for the British government from the “New World,” the lighter load of men and guns gave them more speed for capturing and otherwise discouraging other foreign governments and pirates. Among those British interests was the protection of, and assistance to, privateers carrying Letters of Marque from the king—in the case of the late 17th century, King William of England.

An excerpt from the young adult fantasy book BLACKHEART’S LEGACY, Book 1 of The Odyssey of Jon Sinclair trilogy:

They were interrupted by a loud knock at the door.

“Begging your pardon, Cap’n. There be two new ships on the horizon off our starboard side. One of them is advancing toward that Chinese sloop off our bow, sir!” said Curly sharply.

“Can you see which flag they sail under?” asked the captain as he grabbed his spyglass and quickly walked to the cabin door.

“Ship advancing on Black Opal, starboard forward!” cried the sailor from high in the crow’s nest.

“What do you make of it, Mr. Token?” BlackHeart asked as he peered through his glass.

“I’m not sure. One of the ships is coming this way, rapidly. Notice the high spray of the waves off her bow,” Mr. Token responded. The captain stood looking through the glass, adjusting it first one way and then another to get a closer view.

“Try this one,” Alistair said, handing BlackHeart his own spyglass. “It’s the latest thing and more powerful than yours.”

“Powerful is not the word of it!” BlackHeart said excitedly as he peered through the glass. “Those frigates appear to be sitting on the bow of my ship.” Turning to Guidry, he yelled, “British frigates! Hoist the British flag!”

“You just lost this spyglass, Sinclair. I need it worse than you do,” BlackHeart shouted. Off in the distance, one frigate fired on the sloop sailing forward of the Black Opal, as the other frigate continued its approach.

The British frigate had circled around the stern of the Black Opal to her port side and was now sailing closely alongside the Black Opal.

A group of officers, including the captain of the British vessel, Triumph, stood at their starboard railing, facing the Black Opal.

“I’m glad you assessed my situation so quickly, though I don’t know how you did,” shouted BlackHeart, who had moved to the port railing.

“It was easy,” shouted Captain Villeroy. “Chinese sloops only escort Chinese ships, not brigantines! And you, BlackHeart, sail the only brigantine on the seas. How did you pick up the sloops?”

Author’s Note: Was the notorious gentleman pirate, Captain BlackHeart, a pirate or a privateer? What was a privateer?

NEXT TIME: “ PRIVATEERS” … and how they affected the days of Book 1, BlackHeart’s Legacy…

» Privateers, Letters of Marque—Wars and Pirates
« The “Darling” Pirate Ship: A Sloop