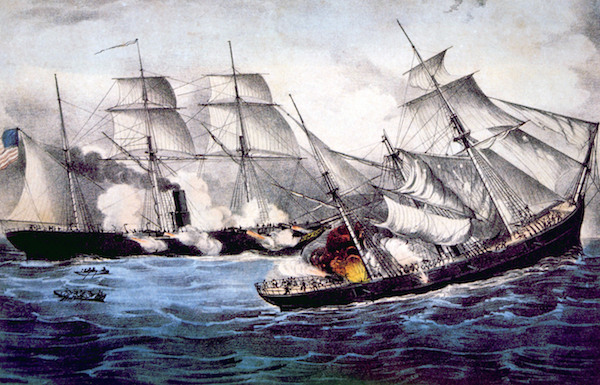 The two excerpts about sloops below are from the young adult fantasy book KEYS TO ATLANTIS, Book. 2, The Odyssey of Jon Sinclair, by Sally Copus:

Advantages of a Sloop (Excerpt One):

With his days as a privateer chasing down pirates being a thing of the past, Captain BlackHeart had put his well-merited earnings into a new endeavor: trading. He found that dealing in small items took up less space on his ship and paid off handsomely in higher profits. But cargo of this type attracted the attention of pirates. He and his crew would be an easy target if they didn’t know the seas well and the places where brigands lay in wait; in other words, where not to sail was more important than knowing the fastest routes. In this regard, BlackHeart’s past played a key role—he could think like a pirate.

To avoid these distasteful situations as well as the unnecessary risk, he needed a fast ship: one with a single mast with multisail rigging capabilities; one that navigated well in the shifty Mediterranean winds and currents. He needed a ship he could arm with sixteen big guns below and four smaller cannon on top. The vessel had to have a shallow draft in order to hide in remote coves and behind rocks. A crew of seventy men would be perfect. The new ship had to be able to sail the Atlantic Ocean, and above all, it had to do eleven knots, fully loaded. Only one ship fit the bill, and BlackHeart took delivery on that ship in Bermuda—a sloop … the Talisman.

“Down! Everybody down!” Spider’s loud command echoed across the Talisman, followed by the sound of his shrill command pipe. A loud boom bounced against the water, accompanied by a shrill whistle and a cannonball that overshot the Talisman and splashed into the sea on its starboard side, sending water flooding the deck.

The Talisman crew immediately retaliated with a shot in the direction indicated by Captain Spider. A loud blast, followed by several smaller eruptions and ending in a massive explosion, signaled a direct hit to the gun powder supply of the now dead-in-the-water ship to portside

“Close call!” remarked BlackHeart as another loud report was heard coming from the opposite side of the Talisman. This time the cannonball came from starboard, careening into the Talisman between its staysail and course sail—right next to its single mast—smashing deck boxes, storage crates, and deck planks into flying splinters and finally landing a deck below in the cannon bay. There it erupted into a small fire close to a sack of gunpowder. Skull’s big gun crew quickly doused the flames with one of the buckets of water standing by for that very purpose.

Spyglass in hand, Jon ran to starboard for a better look. Before Spider could situate the ship for the big guns below to take a straight shot, the oncoming vessel on the starboard side was closing in on the Talisman. The approaching ship from the drifting fog was similar in size to the Talisman.

“They’re going to board—starboard!” BlackHeart shouted to Spider as the ship angled toward the starboard side of the Talisman.

“My sword! I need my sword!” Jon exclaimed.

Jamaican shipbuilders produced a sloop built of red cedar with a reputation for speed and seaworthiness. The sloop was usually a single-mast vessel with a fore and aft main sail, a foresail and a jib. It frequently carried a square-rigged topsail. Pirates and smugglers liked this type ship because it could hide in coves and shallow channels where larger warships could not enter. The clincher was the speedy escape it provided. Such was Captain BlackHeart’s choice for his Mediterranean trading vessel: a Bermuda sloop with multi-rigging capabilities like today’s gaff cutter: Talisman—a ship that could maneuver and hide in shallow coastal waters and answer the call for speed to outrun pirates on the prowl for the unsuspecting!