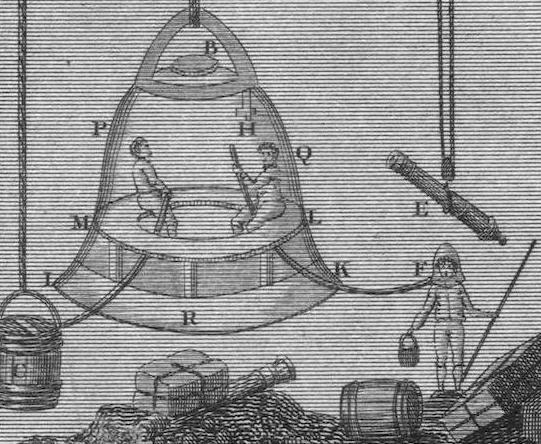 Jon Sinclair, from the YA fantasy fiction series The Odyssey of Jon Sinclair, continues his interview with author Sally Copus.

Jon Sinclair: Hey, Sally! Where ya’ been?

Sally Copus: Cleaning up my desk to get back on Book 3 in The Odyssey of Jon Sinclair.

Jon: Well, at least you were thinking of me.

Sally: I’m always thinking of you, Jon, and writing your story in my head even when I’m not at a computer. How goes it?

Jon: Good! Nikos is out this week—one of his special clients—a guy involved in special ops. We should get some incredible info from this group. It’ll come in handy for the trip forward in time. Of course, it won’t be good enough for the 24th century, but better than what we have now.

Sally: So, what are we talking about today, Jon? Special ops weapons?

Jon: A surprise! Something a little older—the diving bell. I read on the Internet that Alexander the Great had one and that surprised me. Did you know that?

Sally: Actually, I did. Diving bells of one form or another have been around since the 4th century BC; or maybe before. The one Alexander had could be submerged to a depth of 25 meters and consisted of colorless glass so the diver could see through it.

Jon: Awesome. If I’d known that, I would have checked it out when I was at the Library of Alexandria in Keys to Atlantis (Book 2). But, then you had me, uhh-h, “dropped” down a  concealed shaft into the cisterns without a weapon so I could meet the “ancient Egyptian falcon god” and go a few rounds of battle with him. I wasn’t much good for anything for a couple of days after that. (Sally laughs.)

Sally: A-hmm, let’s get back to the diving bell. During the Middle Ages, interest in the sea diminished because the sea was considered a mysterious and dangerous place with unknown powers lurking beneath the surface. People were encouraged to fear it. People became superstitious and afraid to venture into the deep.

Jon: Yeah, even Spider was scared. He thought a curse was coming up at any minute. Captain BlackHeart never did convince him that there were no curses. And that was in 1692.

Sally: Yes, and it comes closer to our time than you might think. People have always been afraid of the unknown, or whatever cannot be readily seen. But back to the diving bell that we have pictured in BlackHeart’s Legacy (Book 1): That diving bell was invented by Englishman Edmund Halley in 1690. But men like English nobleman and privateer Captain BlackHeart would have tested them out for inventors like Halley. Probably in a similar way as you will be testing such for those special ops people Nikos is seeing this week.

Jon: Yeah. But let’s go back to Halley—didn’t he discover “Halley’s Comet”?

Sally: Not exactly. But it is the same man, Sir Edmund Halley, who is involved in both events. He was not the discoverer of the comet, but he was the first one to recognize that the comet that appeared in 1682 must be the same object that had also been observed in 1531 and 1607. He also predicted its return in another 76 years. But we’re getting into deep water here because it gets into Newton’s laws of gravity and motion. We could talk for a year or more on that subject, Jon.

Jon: Oh, yeah! And I do have to get back because I’m helping BlackHeart with some apps on his laptop. He’s really coming along great with both Nikos and me giving him a helping hand, or brain, that is. But, he starts in earnest tonight with a professional instructor and wants to brush up on some basics first.

Sally: OK, Jon. I’ll add a couple of websites to this post regarding the diving bell and Sir Edmund Halley.

AUTHOR’S NOTE: For Jon Sinclair, and others of you wanting to read more about the *Diving Bell and **Sir Edmund Halley, reference these two sites below:

**Skulls in the Stars (Edmund Halley Takes a Dive):

» Yo-Ho-Ho and a Bottle of Rum: How to Talk Like a Pirate
« Jon Sinclair Interviews YA Fantasy Fiction Author Sally Copus (Part 2)